I received a email from one of my higher authorities to backup one of the ERP servers data, reformat it and keep it ready for re-installation of application.

The server was used for testing purpose, and am well aware of these people’s reaction and baseless pinpoints, oh you didn’t backup this, and that and oh what happened to the file blah blah blah….

How can one (sysadmin’s) defend in such a situation, well here am sharing my experience as well the proactive measures adopted in backing up the system.

It would have been simple, just copy the data (excluding system files) from servers internal drive (all partitions) to external hdd and reformat the server.
But i wanted to adopt a different method of backup, as well the traditional backup.

Hence i backed up the entire physical machine (see the pic at the end for the machine type and model) using VMware Converter (P2V – Physical to Virtual backup) to be imported into VMware Server version 2.0.1 build 156745. The conversion was successful, but when i tried to import the virtual machine i received the following error:

After searching through vmware forum and inspite of adopting the suggestions recommended in fixing the similar error other peers had faced the import failed. Finally i found another suggestion (thanks tech.alexi of petri.co.il) though omgili search. 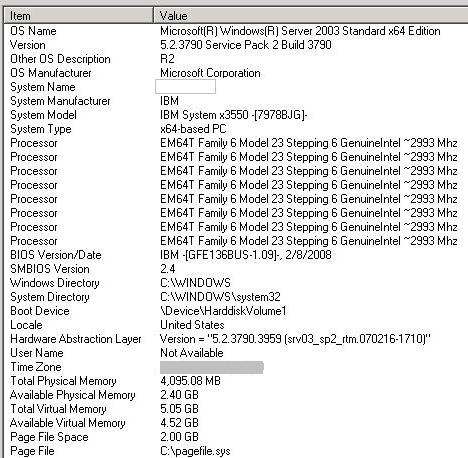 Note: All the critical information revealing the organization data are concealed in the pics due to security measures.

Objective: proof of concept testbed to check the feasibility of P2V

below are the details:

Note: It was tested to check the above mention objective, no other test was run after P2V migration.
Need to test the same with Citrix XenServer and will eventually post the same.

Rich McDougall and Scott Drummand, performance gurus over at VMware, presented a fantastic review of some of the performance testing VMware as been doing at the VMware analyst day. I posted something about the findings of that research in the post, Is VMware busting the virtualization tax myth. I’ve just gotten an impressive update.


Now you need to expand the capacity of the disk to take advantage of its new size. If the disk is the system volume you will need to mount the disk in a second VM and expand it from there. If its not a system volume do it within the virtual machine it belongs to.
To expand the size of a virtual disk, and the virtual disk is partitioned, you will need to use a third-party utility to resize the expanded partitions.
Examples of third-party utilities include:

Here i used GParted liveCD expanded the volume, dont create another partition from the extended size.

Error: Twitter did not respond. Please wait a few minutes and refresh this page.